The Book of Mormon: The Earliest Text

Turner September 06, Turner The Book of Mormon embarrasses me. Not because of its content, but because I haven't read it. I cringe when Mormon History friends ask me if I've read the most famous of American scriptures, as it seems irresponsible to undertake a project of any significance on Mormon history and avoid the "Gold Bible. As I was trying to get to Utah State before the archives opened, it was quite early, and I didn't make it through very many chapters of 1 Nephi before fatigue forced me to another form of entertainment. Mark Twain's famous infamous to some, I imagine of the BOM as "chloroform in print" seemed persuasive.

I put the project aside and endured the indignity of continuing to tell friends I hadn't read it. Depressing setback. I'm teaching a graduate course on Religion in 19th-Century America this semester.

I'm privileging my students with a disproportionate amount of things Latter-day Saint including an assessment of Will Bagley and Ronald Walker, et al. As part of our introduction to Mormonism, I assigned selections from the BOM that further my own reading 1 Nephi, chpts.


These short chunks suited me more than my prior attempt -- I found some portions quite eloquent esp. My students' reactions varied sharply.

Several, though, found the book evocative and biblical. I don't have any scholarly or even well-informed opinions about the book. After all, I've got a long way to go. From the little I've read about the book's production, however, I find entirely unpersuasive the theories that anyone either than Joseph Smith translated the text however one wishes to define "translate".

I read the BOM as a product of its time, but that does not prevent me from being drawn into the narrative at points or contemplating its function as scripture. Thus, even though I do not accept Smith as a divine prophet, I do think outsiders underestimate him despite Harold Bloom's designation of him as a "religious genius.

Now, Skousen presents a corrected text that aims to approach as nearly as possible that dictated by Joseph Smith to Oliver Cowdery and others in the late s. They must be expecting robust sales. I have only read Grant Hardy's introduction a concise source on the production of the BOM , read Skousen's own preface, and poked around the text. I like the way Skousen has presented the text in "sense-lines," breaking up the text in phrases and clauses.

The method increases the text's readability somewhat. I do wish the most important discrepancies were footnoted in the body of the text itself as in, say, the Nestle-Aland Greek New Testament rather than in an appendix. Yale's publication of Skousen's crowning achievement itself signifies the maturation and partial mainstreaming of Mormon Studies. It's not as if the leading university presses have ignored Mormonism; indeed, they have long published books on various Mormon history topics. However, Skousen's work is of another genre, an effort of textual criticism focused on an American scripture, edited by a professor at BYU who has done at least some of his work through FARMS.

I reckon that until recently Skousen's work would not have found such a warm reception at places like Yale.

I'm glad times have changed. Alas, whether via Skousen or the BOM left in my departmental mailbox by a Mormon elder who missed me, I have hundreds of chapters to go. I need a Mormon version of the "Read-the-Bible-in-a-Year" promoted by so many evangelical churches. Even better yet, a Walk Thru the Book of Mormon in a weekend program. Any suggestions? Labels: book of mormon Mormonism new books teaching.

As I have read the Book of Mormon, I think that it probably would be best to break it down into stories and major sermons. That isn't to say that I have given it much thought to how that might be done. Probably the best way to approach the Book of Mormon is with familiarity. Not that this helps the first time reader, but it does dispense with an uncomfortable first reading. 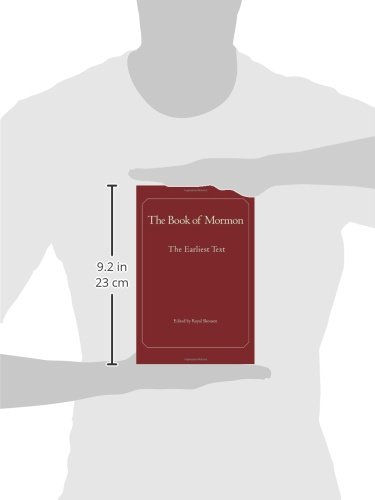 If you talk to those who love the Book of Mormon as I do what you notice is the more times someone reads it the more they enjoy the book. There is a depth that is missed by those who are just trying to get past its slow narrative. A suggestion I would give to first time readers is similar to the above break down into parts. Regardless of what you think of its validity as history, if you treat it as an historical chronicle with religious purpose like you would the first part of the Old Testament it becomes easier to digest and understand. Take it in parts rather than as a whole chunk as the text is a lot more dense than is supposed, but seems to always be treated as thin by detractors and supporters.

Maybe I will come back and re-post what the break down readings might help.

September 7, at AM. John G. Turner said…. Thanks -- I'd love to have the suggested breakdown. Especially as I'm progressing through Brigham Young's life, the BOM is becoming a bit more significant in his preaching, and I'd like to keep up! Brad Hart said…. Mormon historian Hugh Nibley wrote some interesting books and "study guides" that could be used in ones study of the Book of Mormon. Will such a text usurp the present official edition?

Will the selections made by Skousen ever find there way into a future official edition? It will be apparent that the original text is both more repetitive and less grammatical than the standard version. These qualities have always posed a problem for readers, and even for Joseph Smith himself. In his editing for the and editions, he made several thousand changes, virtually all grammatical or stylistic in nature, in an attempt to modernize the language. These are theological rather than historical questions, and to his credit Skousen has edited both conservatively and unapologetically, by which I mean that he had been willing to follow the data wherever it leads, but only when there is a preponderance of evidence.

One result of this choice is that it is very unlikely that the LDS church will ever adopt The Earliest Text as its official, canonical version. Moreover, the LDS church has concerns and priorities that take precedence over exact scholarly reconstructions. To once again cite the example of New Testament scholarship, it could be argued that the Greek text, as established in the Nestle-Aland twenty-seventh edition, has the best claim be being accepted as the canonized word of God, but most people will benefit from translations. So also, the current LDS edition of the Book of Mormon can be considered a translation of sorts into more standard English.

This statement sheds some light on several questions related to the relationship between The Earliest Text and the edition. About this edition : Some minor errors in the text have been perpetuated in past editions of the Book of Mormon. This edition contains corrections that seem appropriate to bring the material into conformity with prepublication manuscripts and early editions edited by the Prophet Joseph Smith. Nice first post. I like how you provide some clarification about the types of changes that could be considered in future editions.

BHodges pointed out an interesting variant in a passage that originally used the word directors instead of interpreters. This in contrast to Joseph and Lucy Smith who came to prefer biblical terminology urim and thummim to refer to such aids after Phelps made the connection in The present edition retains the alteration.

We succeed only as we identify in life, or in war, or in anything else, a single overriding objective, and make all other considerations bend to that one objective.